Upclose and Personal with Wolves Photoshoot

All of the images here are in the album that will be linked in the end.  For space purposes I only posted a few small images so please visit the album to see all of the wolf photographs.  All images are also for sale.

I opened my eyes at 6:00am looking out the window from bed, only to realize the weatherman was right. It snowed and there was enough of it, at least 4 inches or so.  It was going to be a cold day and I snuggled under the covers for a few last minutes thinking that the snow was not going to hinder me, nor was the early morning rise.  I prepared the night before for this trip and was scheduled to meet with the Colorado Learning Photography Meetup Group, lead by Mike Pach.  I was pretty excited.  Today, I was going to photograph and pet real wolves at the Rocky Mountain Wildlife Foundation (RMWF).  We bundled up and headed out the door, hitting the road at 7am.  We had to be there to meet everyone at 9am in Guffey, CO and the drive was approx 2 hours from my home.  I had never been there so I had no idea on the condition of the roads, as you never know in CO.  I was slightly worried that snow might slow us down especially out west where we were headed.

The landscape from the road was beautiful that early morning.  All the snow was fresh and most folks were still asleep.  Stunning actually, with all the blue and white.

We noticed as we got further west there was even less snow past Baily.  I was utterly surprised.  I did notice as we turned to head south from Fairplay that there was pretty much "nothing" out this way.  We drove for miles before seeing a town at times.  The road was icy in a few places and even snow covered, but not so bad.  We arrived just on time, to be greeted by Mike Pach at the entrance area, and drove up the dirt path to the meet the rest of the group.  On arrival it was cold and a bit windy so we were layered in many clothes even tho there wasn't as much snow as we had east in Conifer.  I got out of the car and introduced myself to Mark who started and owns the foundation.  There were a few folks already there but a few more behind me that we were waiting on.  The view from up there was another stunner.  Here is an image from the very top looking out from the area.  In the distance are the Sangre De Christo mountains.  You can see the dirt road we drove up. 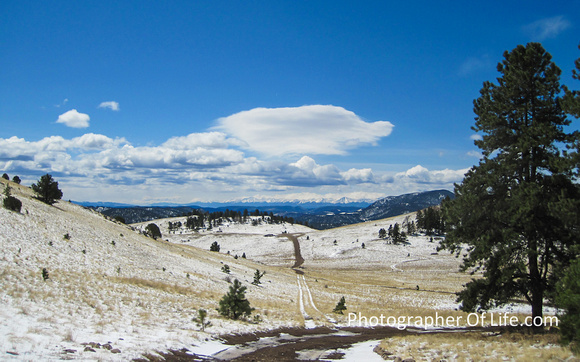 You could see the wolves in their cages, as we waited for the rest of the group.  We were getting the low down and background history.  I was so anxious and excited it was hard to pay attention.  The one thing I did hear was not to put your finger in the cages without a guide or your finger could be mistaken for a hot dog, which has happened in the past.  When the rest of the group arrived, we were given a quick informal tour where there were several different cage area's and approx 12 wolves, a small few were mixed bread / dog.  Then we were broken into 3 groups with 3 leads (I went with Mark) who was most familiar with the wolves (there were approx 20 of us).

We learned a lot about the RMWF and Marks experiences as we entered each cage area.  Pia's cage could not be entered but we were able to snap a few shots of her eating.  It was interesting to hear how each of the wolves either arrived or grew up there.  Some of their stories are very sad.  They do get fed by local farm donations. 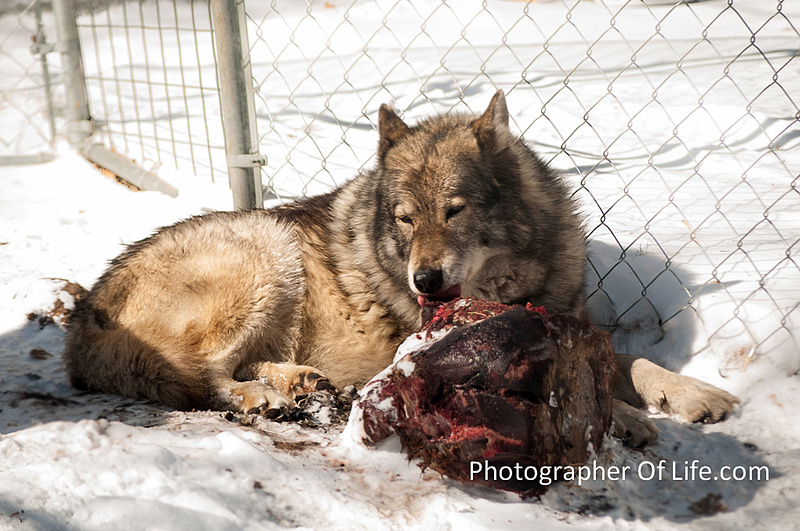 Ladyhawke and Merlina's cage could not be entered either.  Merlina did not like company, and even tho Ladyhawke was friendly she did not like men.  They were not allowed to pet her thru the cages while we were.  Mark did say if we came up often enough eventually we would be able to go in and pet her.  Females only, I presume.

I was not able to get many shots as she was very active, but I did catch a few.  She is an Arctic wolf.  Merlina was much more elusive and stayed far in the back so it was harder to get a good image of her. 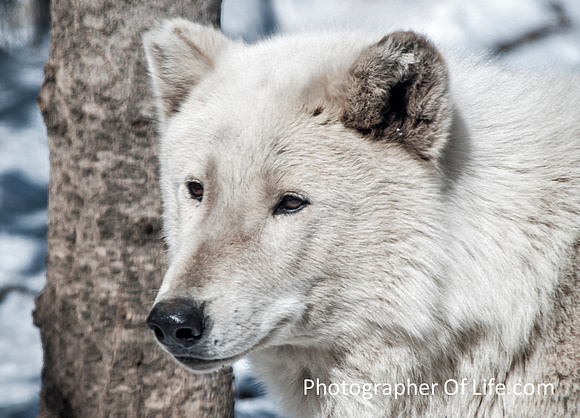 Most exciting was when we finally got to actually enter a cage.  Strangely, I wasn't nervous at all.  We were only allowed to enter certain cages and of course only with a guide.  Our first was with Mama Bear and Baby.  Who came up and licked on us, got pet a little and then went and laid down. 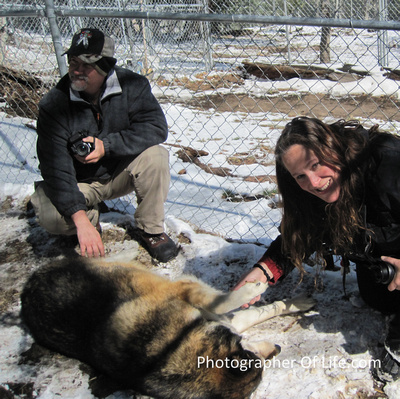 Our second cage was with Zoya, who was part Malamute and part wolf.  Two different colored eyes and friendly as hell.  We were told the stories of how they came to be there, but you will have to go hear that for yourself.  Zoya, seemed much more friendly to the men folks then she did us women.  See the album for a few more great shots of her.

By this time, the cold seemed to let up a little which was nice.

After visiting Zoya for a while we headed back up to the main pen area where we spent most of the time hanging out.  There were 4 wolves there .  One wolf, Navajo, did not like to play with humans and just stayed behind the little den house for the most part pacing as folks are in the  pen.  Mark has to stand in the pen to keep Navajo in check as he is the Omega of the group.  The other three were very playful as you will see in the images.  I got so many kisses and so much love from them, one of them would not stop coming to me to get her belly rubbed.  Their fur is rather thick and course.  They do eat fresh meat donated by farms in the area.  Here are just a few photographs of us in the cages.  Remember to see the album at the end for better quality and much larger images.  Some of these images of me were taken by the other photographers in the group. 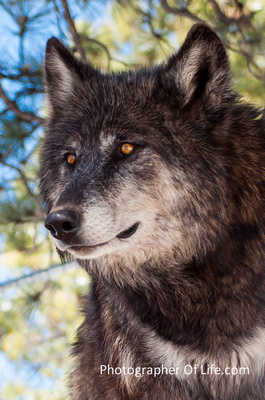 After tons of pictures it was time to head out, grab a bite to eat with the group and listen to Mark give a presentation.  Headed into town, taken with cell: 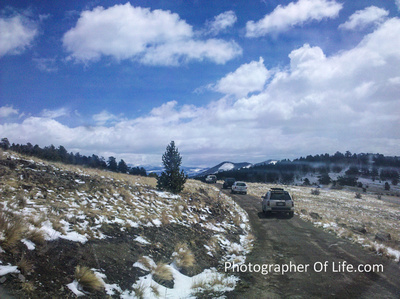 We headed to the Bull Mouse Restaurant and Bar about 2 miles in town who had a room set up for Mark and ready for us. 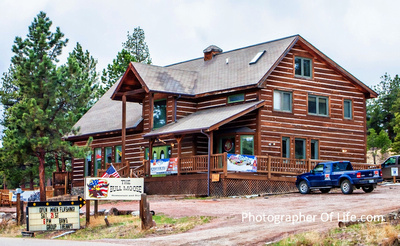 To make a long story short, the food and service was excellent and I highly recommend the place to anyone who visits.  My favorite the beer battered onion rings.  YUM!  The burgers were better than I have gotten anywhere in town.  Strange that out in the middle of no where, a town of 35 people Mark says they have 3 restaurants.  Must have a lot of foodies.

The town of Guffey will not let you down in antiques either.  Its like a place lost in time.  A must visit. 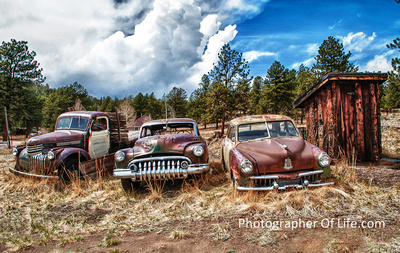 Mark was an excellent host and very kind man.  He is doing a lot for these wolves and not charging to go and play with them.  Full exclusive rights to images and you get lots of time.  They do take donations and for a worth cause.  When you visit you will hear how some of these animals were abused and mistreated and were rescued and cared for by this foundation.  You can see they are well fed.   I will be back up in the summer for sure.  Oh and the group of folks from the meetup were great.  I can say I look forward to seeing some of them again and hopefully becoming friends.   I plan on another trip up here in the summer.

We headed home with full bellies and a well spent day, the snow had melted and the drive pleasant. 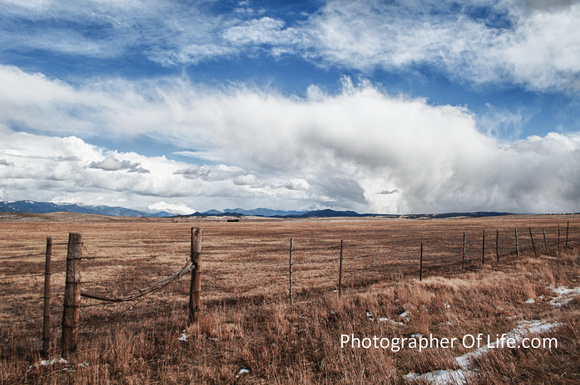 That is until we got back to Conifer where yet again it was snowing.

* The wolf or landscape photographs in this series can be purchased.