What would you do for your art/passion?

Saturday I woke up to kitten love and just over my kittens head I could see that it had been and still was snowing outside.  It was one of those days to just stay in bed or snuggle up to some good junk food on the couch with a movie.  I was thinking maybe I might even get a chance to do that for once.  You see I had plans this day, I was supposed travel 70 miles down north to Wisdom Tea to pick up one of my pieces of work, "A Tree under the Milkyway" from a show that was soon ending and then drive 70 miles back home.  I was picking it up early so I could get it into another show that was starting at Academy Frame called "Nightscapes"  It was the perfect fit for that show and had to be dropped off by today.  But peering out the window from my bed I wondered if maybe, just maybe I could by pass the traveling in this snowstorm and perhaps do it the following day or two.  I called Academy Frame right away and they were, as always, flexible and awesome about it.  Kim, the owner, preffered I be safe, and warm and not head out.  I almost settled back in bed when I realized, I better check what hours Wisdom was open.  I gave them a quick call and found out they were closed Sundays and Mondays.  So I had no other option but to drive down today in the snow.

I realized time was running late and I had to get there at a certain time.  With the snow as it was I didnt want to take the main highway (too many cars) and it was going to take me even longer.  So I jumped out of bed threw on some clothes grabbed some tea and water and headed out thinking I could get some delicious food at Wisdom.  I passed a gas station as I approached the highway and saw I had 1/2  tank but figured I would fill up down there in Monument, that I just wanted to get a move on. I had no idea what condition the roads were going to be in but assumed snowy. ;)

The ride was slow 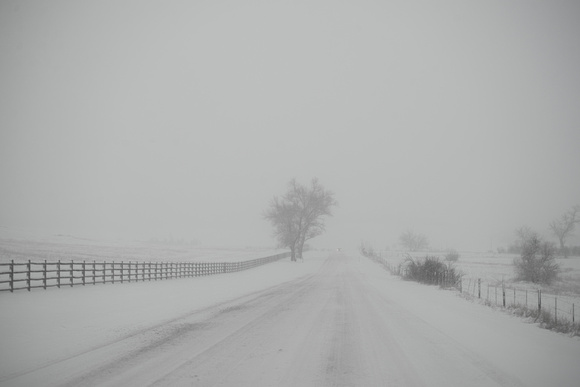 going since it was pretty slippery, but taking the backroads is also a treat in the scenery and well not many people on that road.  I stopped a few times as I couldnt help myself.  Knowing i was pressed for time, but with this snow and not even touched yet, it was just beautiful.  It almost felt like a scene out of a movie and I was trying to not slide off the road.  ;)  A few times I had to let people go by me,  just in case i saw something I wanted to stop for.  You see, you can't really pull over because the snow was deep enough you didnt know if it was a ditch or not.  So  few times I stopped in the middle of the road.  This is just one example of how stunning it was:

I finally made it down to Wisdom tea and the snow was getting pretty thick, and man was I hungry.  I went in my pocket book to get my wallet to run inside and get food and some more tea.  And to my surprise, i realized I left my wallet at home, but had my checkbook on me. .  Oh man, that was just not good.  The roads were so dangerous and driving with no ID?  This was just too much, not to mention i was so hungry.  I went inside to pick up my image and told the guy working there my story.  He said they do take checks but ....the kitchen was already closed and all they had was cake if I wanted.  I was so hungry anything at that moment would have worked (okay not anything)   While I sat there scarfing down my cake and sipping my earl grey tea, I called a friend of mine, Lucy,  whom I had not seen in about 6 months or so, who lived right off that road I took down.  She said I should stop in on my way back if I could.  I contemplated it and got my work and left.

As I headed back it started getting dark, and in some spots snowing really hard.  The roads were already frozen over too.  I managed to capture a few image of the snow falling in the dark and pressed on.  As I arrived at the turn to go up to my friends house i made a last minute decision to just go ahead and stop in.  I headed up her road going so slowly in the last bit of light, which was a good thing.  Two deer in the middle of the road.  I was going so slow i had no problem stopping for them.  I arrived at my friends and knocked on her door.  As I entered her house we went into the kitchen and there sitting on the stove looked to be a pie of some sort fresh out of the oven.  I salivated, i guess the cake didnt do the job.  She looked at me and said, "your just in time, I made a homemade chicken pot pie and just took it out of the oven".  I tell ya, chicken pot pie never looked or tasted so good! ;)

It was around 9pm and I figured I would head home as it would still take me an hour or more to get home depending on the roads.  So I headed out into the snowy night.  The roads for some reason were not as bad as I thought as I suppose all the salts were working.  However shortly after getting on the highway I realized i was going to run out of gas soon.  There was no way I had enough to get home since I had about another 35 miles to go.  How far can someone get with the gas light on?  I pulled off an exit and into the conocco gas station on the hunt for emergency money in my car.  I normally keep some sort of change.  As i searched I Could only find about $3.50 enough for a gallon.  I am one to think of solutions instead of freak out. HA.  So I texted another friend who lived close by to where i was now, to see if they could spot me a few bucks for gas til I got home.  The text read "Hey are you home?".  HA.  I didnt know if they got back from their holiday traveling yet.  I approached the store thinking i was going to fill my tank with the little I had.  Since I am a talker I happened to tell the lady behind the counter what happened and she wanted to give me a $1 of her own money. HA ..I could imagine how many people come up with that story.  I have heard some myself from beggars.  Just then my friend texted me back,"I home".  A huge sigh of relief came over me.  My friend called an invited me over to grab some cash.  Long story short, I visited for a little while which was long over due and got on my way.  It was around 12 am at this time.  On my way to the gas station, I couldn't help but feel uncomfortable, as I drove alongside a police car hoping they weren't looking to harrass someone (since I had no ID on me).  I reached the gas station filled her up and headed home.

Moral of the story.  We do some strange things for our art.  Its no wonder it has a price. (smiles).  Actually, there are many morals to this story.  ALways keep emergency money in your car and we all need people from time to time.  I feel blessed to have so many awesome people in my life.  And most of all, life is a journey.  The road will have its hardships, and its blessings.  Don't be afraid, they always have a way of working out if you dont cave to fear. ;)

Many thanks to Ginny, Alan and Lucy......so grateful to have you in my life.

Here are some images I took along this journey...all are available in larger sizes and for purchase.

click each image to see in a larger size 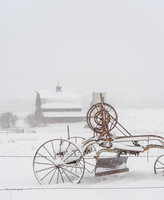